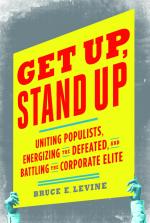 Ralph Nader just recommend a book from one of our favorite publisher as summer reading. Here is what he had to say:

Get Up, Stand Up: Uniting Populists, Energizing the Defeated and Battling the Corporate Elite by Bruce E. Levine, Chelsea Green, 2011. Going beyond the how-to-become-active civic handbook, Levine, a clinical psychologist invites us to explore what he calls the “learned helplessness” that has “taken hold for a great many Americans…locked into an abuse syndrome in which revelations about their victimization by a corporate-government partnership produce increased anesthetization rather than constructive action.” The author, citing historian Lawrence Goodwy, then shows many ways toward “individual self-respect” and “collective self-confidence,” the “cultural building blocks of mass democratic politics.”

Peace Couple was queried about receiving a free review copy of a book of essays called the Occupy Handbook (535pp, 2012, Back Bay Books).

The book’s title got me thinking about the possibility of which essays would be in my personal Occupy Handbook.  First, would be a selection from the Fellowship of Reconciliation‘s 1958 MLK comic book that was translated into Arabic and used as a nonviolent training tool for the Arab Spring.  Paired with that would be an essay from Gene Sharp, whose 198 Methods of Nonviolent Action shaped the tactics of the Arab Spring.  Next, I would include an article by Adbusters and Naomi Klein about the fomenting of Occupy in the US.  Delving into the Occupy movement itself would require an exploration of the power of consensus and direct democracy: So, I would include writings that reflect the concepts shown in the video Consensus (Direct Democracy @ Occupy Wall Street):

The Occupy Handbook we were sent to review is heavily tilted toward economic issues (and covers them well), but the book barely acknowledges the democracy, social justice, antiwar, and environmental issues that have been raised by the Occupy movement.  That is why it would be important to include  the fruit of consensus process such as Occupy Wall Street’s One Demand and the Declaration of the Occupation of New York City which contain a much broader vision of a better world than simply economic reform.

In terms of people who have informed the Occupy movement, I would include:

END_OF_DOCUMENT_TOKEN_TO_BE_REPLACED

Duke Augustus was pleasantly surprised last night to hear former Alaska Governor Sarah Palin describe the US economy as “Corporate Socialism.”  This a a term that the Duke has been using for years to describe the US economy.  And a term that a quick Google search show was also used by Ralph Nader. The concept is simple.  The US has not had a capitalist economy since the first Europeans landed.  Classical Capitalism requires buyers and sellers with equal power and equal information.  Instead, the US has an economy planned by a small group, the classical definition of socialism.  That small group is not a politburo.  It is a klatch of large corporations.  Hence “corporate socialism.”

Duke Augustus agrees with Palin’s first conclusion.  That once we recognize that our economy is “corporate socialism”, it is clear that the bailouts are merely self-dealing by the oligarchs who run the economy.  The bailouts do not favor the flesh and blood citizens.  After all, large corporations do not make jobs — small and medium size companies are the job engines of the US economy.  Large corporations do not invest in the US economy.  They don’t even pay taxes.  These large corporations hide any profits they get in off-shore tax shelters and then use the tax rebates they get to lobby the US Congress to give them a tax holiday to bring these sheltered profits back while only paying a 5% tax.  END_OF_DOCUMENT_TOKEN_TO_BE_REPLACED

Duke Augustus writes: Your Money or Your Life: 9 Steps to Transforming Your Relationship with Money and Achieving Financial Independence: Revised and Updated for the 21st Century by Vicki Robin and Joe Dominguez sparked the modern simplicity movement. It remains one of the pre-eminent sources for how to create financial freedom by separating your needs from your wants. This is not a get rich quick scheme. It is the progeny of Thoreau’s On Walden Pond. The Harvard-educated Thoreau freed himself from the business world by by taking the extraordinary measure of changing his life from pencil manufacturer to squatter. Dominguez and Robin suggest a less drastic change by helping you re-direct your prosperity from consumer driven wants to enough wealth to stop working.

The publisher describes the book as: END_OF_DOCUMENT_TOKEN_TO_BE_REPLACED